Royal Road Productions appreciates your support. If you’d like to support a project or would like information on project budgets, please send an inquiry to [email protected], or make a donation online. 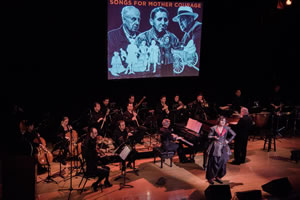 The participants offered readings from Eric Bentley's classic works and shared their thoughts about Bentley’s influence on them personally and on American theater, music, and culture. Eisler-Brecht songs were performed along the way in English versions by Eric Bentley by Karyn Levitt with pianist Eric Ostling and The Hanns Eisler Trio. Songs for Mother Courage with music by Darius Milhaud in its original, unpublished orchestration for 14 chamber instruments and words by Bertolt Brecht in English versions by Eric Bentley, received its world premiere by Karyn Levitt with the Metamorphosis Chamber Orchestra conducted by the late, great, four-time Emmy winner, Glen Roven, to whose honor the film is being dedicated.

Many of Hollywood’s greatest film scores were written by émigré and exiled composers who fled Nazi Europe for Southern California. Musical geniuses like Kurt Weill, Max Steiner, Erich Korngold, and Dimitri Tiomkin brought from their respective homelands the highest level of culture, which they poured into American film music. From dusty westerns and sweeping romances to the thrillers of Alfred Hitchcock, "On Hollywood and Weimar” celebrates the blending of the old world and the new to produce the uniquely hybrid sound of Hollywood's Golden Age, with songs performed by soprano Karyn Levitt and pianist Jed Distler.

We are excited about the great success of the premiere of On Hollywood and Weimar, the brand new show from Royal Road Productions, Inc. On June 6th, 2019, Off-Broadway's York Theatre hosted the presentation, starring soprano Karyn Levitt and pianist Jed Distler. The 75-minute program features the songs of European composers from the Golden Age of Film curated by Ms. Levitt who also wrote the narration. She was warmly received by the sold-out house. The show was dedicated to the honor and memory of Royal Road's late Music Director, Glen Roven.

“Karyn: BRAVA! [...] I cannot congratulate or praise you enough for the beautiful work you did, for introducing me to a repertoire and stories that were mostly new to me, and for your terrific and expressive singing. [...] What a rich theme you chose, and you drew the ultimate depth out of it. [...] It was my honor to be there to experience a show that good. It taught me a lot and gave me so much pleasure.”

After a hugely successful year developing the show and performing it at some of NYC's best theaters and supper clubs, Royal Road Productions is planning on sharing On Hollywood and Weimar with the rest of the world through:

Will There Still Be Singing? A Hanns Eisler Cabaret

Eisler was a student of Schoenberg, a contemporary of Kurt Weill, and Brecht’s favorite collaborator.

Karyn Levitt is THE performer of the English Eisler/Brecht repertoire of our time. Her close working relationship with her mentor, Brecht translator and friend Eric Bentley, gives her the opportunity to consult with a contemporary witness and the source of the acclaimed translations to excite the next generation with Hanns Eisler’s music and Bertolt Brecht’s lyrics.

Songs for Mother Courage features music by Darius Milhaud in its original, unpublished orchestration for 14 chamber instruments and words by Bertolt Brecht in English versions by Eric Bentley.

Karyn Levitt is the champion of a neglected but extraordinary German repertoire: the songs of Brecht and Eisler in English adaption by legendary drama critic, playwright, cabaret singer, and world authority on Bertolt Brecht, Eric Bentley. She is writing a book, which is part memoir part handbook, posing a central question: how to get the message of a song across? The answer has to do with everything Levitt has learned from studying at the feet of the master and from her experience and explorations over the last eight years. Singers interested in successfully putting across songs in translation will benefit from her experience, training, scholarly approach, and insights.

Our world premiere of A Hanns Eisler Cabaret at Cafe Sabarsky in THE NEUE GALERIE
on Thursday, March 31st, 2016 at 7PM was a huge success.

We are honored that our album is offered on the Neue Galerie online book store.

Coming Soon!
Our spectacular and historic HAPPY BIRTHDAY ERIC BENTLEY! A CENTENNIAL TRIBUTE CONCERT at Town Hall will soon be a film for screenings on arts channels!

“My Brecht Eisler Song Book has been around for years, finding its way into innumerable schools and homes. This success has not been reflected in the record business until now when Karyn Levitt and Eric Ostling have chosen to record a program based on my book...To parts of this program, to celebrate my 100th year, Karyn and Eric will add Songs for Mother Courage by Darius Milhaud.

“Thank you, Karyn, thank you, Eric, from my heart!” 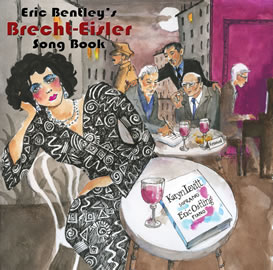 From her rich collaboration with world-renowned Brecht translator Eric Bentley, soprano-actress Karyn Levitt releases her first album of Brecht-Eisler songs in English translation. Austro-German composer Hanns Eisler created a vast and varied repertory of works, and this album presents a sample of his genius and versatility. Eric Bentley adapted the song texts (which are poems and theater ballads by Brecht) from their original German into English, unlocking Eisler’s starkly beautiful songs for English-speaking audiences. According to critic Irving Wardle, Ms. Levitt “negotiates a passage for these songs into the concert hall, and in place of the gritty style allows the songs to bloom...”

Soprano Karyn Levitt is an Oberlin-trained performer who has appeared at Carnegie Hall and other distinguished venues. Levitt initiated her collaboration with Bentley in 2011 when she wrote a letter to the Theatre Hall of Fame inductee requesting counsel on a pending Weill-Brecht show she was planning. Bentley replied days later suggesting that instead of Weill, Levitt explore the works of a lesser known Brecht composer, Hanns Eisler, obtain Bentley’s 1967 The Brecht-Eisler Song Book, and listen to his 1964 recording Songs of Hanns Eisler. He agreed to meet after Levitt had completed her initial research. Levitt took on the research assignment before meeting with Bentley who ultimately presented her with his unpublished English versions of Hanns Eisler's lieder. Within two weeks, Levitt had recorded a demo of the material for her new mentor, who responded “Bravo, Karyn! Now create a whole show!”

Under Bentley’s guidance, Levitt and pianist Eric Ostling created an evening of Eisler's songs that has earned rave reviews around the country with Irving Wardle of the London Times raving “Karyn Levitt is doing something which, to my ears, is new. My acquaintance with the Eisler songs is limited to (other) singers (who have) a harsh and urgent style, very much a product of the cruel and dangerous times in which the work first appeared. Ms. Levitt's approach, it seems to me, is to negotiate a passage for these songs into the concert hall. In place of the gritty style, she allows them to bloom and be beautiful."

The new CD, “Eric Bentley’s Brecht-Eisler Songbook,” is the culmination Levitt’s journey, under the mentoring of Eric Bentley, into the world and music of Hanns Eisler. “I regard it as a privilege that in our numerous coaching sessions over the years, Eric Bentley has given me his unpublished translations of Eisler songs with words by Goethe, Heine, Eichendorff, Leopardi, Anacreon, Karl Kraus, and even Shakespeare,” says Karyn Levitt. “Eisler’s stylistic range is dazzling. Few composers have used Schoenbergian techniques to such lyrical ends, and few would dispute that Eisler was as important a song composer as Schubert. Brecht and Eisler were one of the 20th century’s great musical partnerships.”

The set list for “Eric Bentley’s Brecht-Eisler Songbook features 21 tracks, half of which have never before been recorded.

We are grateful to Nokia Corporation for the $25,000 grant awarded to bootstrap concerts of Eric Bentley’s Brecht-Eisler Song Book at universities and cultural venues around the country.