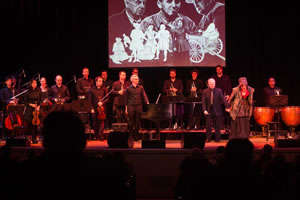 The participants offered readings from Eric Bentley's classic works and shared their thoughts about Bentley’s influence on them personally and on American theater, music, and culture. Eisler-Brecht songs were performed along the way in English versions by Eric Bentley by Karyn Levitt with pianist Eric Ostling and The Hanns Eisler Trio. Songs for Mother Courage with music by Darius Milhaud in its original, unpublished orchestration for 14 chamber instruments and words by Bertolt Brecht in English versions by Eric Bentley, received its world premiere by Karyn Levitt with the Metamorphosis Chamber Orchestra conducted by the late, great, two-time Emmy winner, Glen Roven, to whose honor the film is being dedicated.

“An eloquent tribute to an irreplaceable man.”
-- Irving Wardle, (formerly) drama critic for The Times of London; theatre critic for The Observer and The Independent on Sunday

Stay tuned for an announcement regarding the film's imminent release.

What started as an idea for a tribute to the remarkable composers who found themselves in exile in California in the first half of the last century turned out to be a highly acclaimed and sold-out show in New York City. Celebrating a hugely successful evening, soprano Karyn Levitt and pianist Jed Distler recently brought On Hollywood and Weimar to the legendary NYC cabaret venue Feinstein's/54 Below. This comes on the heels of two equally successful and sold-out performances at Off-Broadway's York Theatre and Triad Theater, and now Royal Road Productions is ready to take the show on tour.

“Introduced me to a repertoire and stories that were mostly new to me…. A rich theme…. Terrific and expressive singing. Beautiful work!”
-- James Gavin, award-winning music journalist and acclaimed author

On Hollywood and Weimar, created by and starring soprano Karyn Levitt with pianist Jed Distler, celebrates the glorious music of old Hollywood by European composers from the Golden Age of Film. Musical geniuses, like Kurt Weill, Erich Korngold, Miklós Rózsa, Dimitri Tiomkin, and Hanns Eisler – many of whom had escaped to Southern California from Nazi Europe — brought from their respective homelands the highest level of culture, which they poured into the American film industry: they blended the music of the old world and the new, thereby creating and inventing the uniquely hybrid sound of Hollywood films. American music benefited as we became heir to their legacy.

From dusty westerns and sweeping romances to the thrillers of Alfred Hitchcock, Karyn Levitt and Jed Distler perform eleven composers’ songs in a theatrically-directed, choreographed, and gorgeously lit musicological journey through some of Hollywood’s most iconic film scores. The songs range in style from Weimar cabaret and operetta to country-western, classical art song, and jazz… from “Falling in Love Again” to “On Green Dolphin Street,” from “San Francisco” to “Spellbound,” from “Rawhide” and “(High Noon) Do Not Forsake Me” to Kurt Weill’s “Song of Ruth,” and more! (Running time: 75 minutes.)

Karyn Levitt is a leading interpreter of this impressive repertoire. She curated all the songs and wrote the narration, which together make the program a perfect homage to the Golden Age of Hollywood. As a distinguished artist/producer, Ms. Levitt is known for her historic collaboration with the foremost Brecht translator, Eric Bentley — whose centennial tribute (hosted by Michael Riedel and featuring Tony Kushner, Austin Pendleton, and other theater luminaries) she produced at The Town Hall and whose work she performs in concert and recorded on her CD, Eric Bentley's Brecht-Eisler Song Book.

About the On Hollywood and Weimar Show

Award-winning music journalist and acclaimed book author James Gavin wrote to Ms. Levitt after the On Hollywood and Weimar show at the York Theatre:

“Karyn: BRAVA! [...] I cannot congratulate or praise you enough for the beautiful work you did, for introducing me to a repertoire and stories that were mostly new to me, and for your terrific and expressive singing. [...] What a rich theme you chose, and you drew the ultimate depth out of it. [...] It was my honor to be there to experience a show that good. It taught me a lot and gave me so much pleasure.” 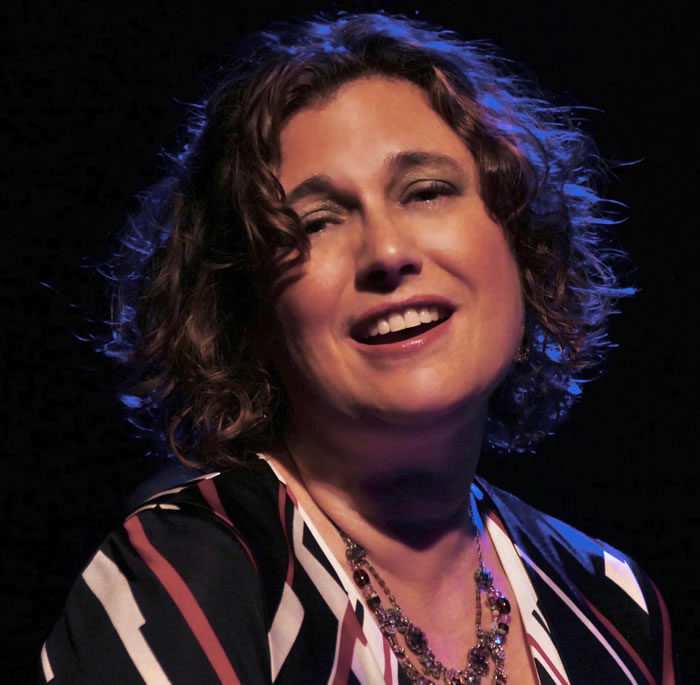 This new CD is the culmination of Levitt’s journey, under the mentoring of Eric Bentley, into the world and music of Hanns Eisler. “I regard it as a privilege that in our numerous coaching sessions over the years, Eric Bentley has given me his unpublished translations of Eisler songs with words by Goethe, Heine, Eichendorff, Leopardi, Anacreon, Karl Kraus, and even Shakespeare,” says Karyn Levitt. “Eisler’s stylistic range is dazzling. Few composers have used Schoenbergian techniques to such lyrical ends, and few would dispute that Eisler was as important a song composer as Schubert. Brecht and Eisler were one of the 20th century’s great musical partnerships.”

Our Hanns Eisler Cabaret at Cafe Sabarsky in THE NEUE GALERIE on March 31st, 2016 was a TRIUMPH!